At the same time, a new session is established. The server also looks up the GLOBAL.ASA file for a Session_onStart event handler. If one is found, it’s executed. At the same time, a new Session object is created, which is associated with the client that established the session. This object remains alive for as long as the client remains connected. When the session is terminated, the server executes the Session_onEnd event handler (which must also reside in the GLOBAL .ASA file).

Let’s look at a typical GLOBAL.ASA file. The file shown next contains the code for keeping track of the total number of visitors that have hit the site (variable Visitors), as well as the number of users currently connected (variable Viewers). 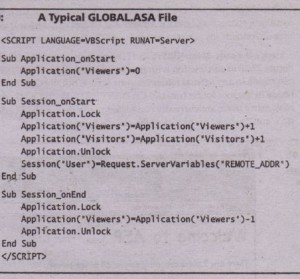 When the Web server starts, it creates a new variable, Viewers. This.variable is initialized to zero when the application starts, and it increases by 1 every time a new session is established. When a session terminates, the Viewers variable is decreased by 1.As a result, it reflects the number of users currently connected .

.The variable Visitors is increased each time a new session is established. This variable reflects the total number or visitors that have hit the site. Of course. this variable is reset to zero every time the Web server is shut down, so you must store its value in . a local file and read it from the file when the application starts.

Notice that you must lock the Application object when You update the values of its variables, but this is not necessary for the Session object. When a new Session object is initiated, it has its own set of local variables. 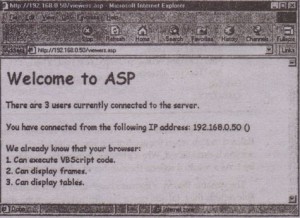 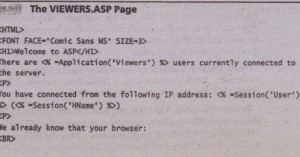 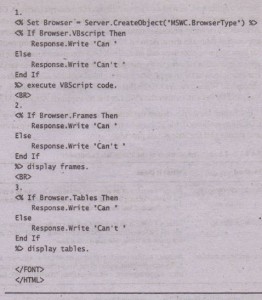 The VIEWERS. ASP page reads the values of the Visitors, Viewers, User, and HName variables’ and displays their values on the page it produces. It also demonstrates the BrowserType component, which returns information about the client’s browsing capabilities. Active Server Pages produce straight HTML code that can be viewed on any browser, so it’s a good idea to consider the basic capabilities of the client before dumping to it a document it can’t display properly. Nearly every browser supports tables and frames, but you can’t assume that all browsers can also execute VBScript code.