In the first part of the book you learned how to use the basic ActiveX controls to build user interfaces. These controls appear on the Toolbox of the Visual Basic editor every time you start a new project, and they are the basic elements of the Windows interface. Windows applications also use other controls which aren’t displayed on the Toolbox by default, such as the File Open and Color dialog boxes. ‘ Other interesting and relatively common ActiveX controls are the TreeView control, which displays hierarchical lists of items, such as those in the left pane of the Windows Explorer, and the RichTextBox control, an advanced word processor. We’ll explore more advanced ActiveX controls in the next chapter. 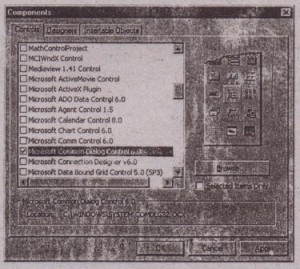 Select the component(s) you want to add by checking the box in front a! their name and clicking the OK button, To add the ImageList, TreeView, and ListView controls, which we’re going to discuss in,the second half of this chapter, check the box Microsoft Common Dialog Control 6.0. To add the Common Dialogs control, which displays familiar common dialog boxes such as File Open, Color, and Font, check the Windows Common Dialogs Control box. To remove certain ActiveX controls from a project, simply uncheck them, and then click the OK button, You should always remove ActiveX controls that aren’t going to be used in a project, since they only add to the size of the distribution files.