Before we dive into the examples of using specific API functions, let’s go over the fundamental concepts. The Win 32 API consists of functions, structures, and messages that can be accessed to build Windows 95/98 and Windows NT applications.

The four functional categories of the Windows API are:

The Graphics Device Interface provides the functions you use to manage all supported graphical devices on your system, including the monitor and printer. In addition, you can define fonts, pens, and brushes. The GDI provides support for the line and circle drawing operations and for bit-blit operations with the BitBlt() function. (For details on bit-blt, see the discussion of the PaintPicture method in Chapter 7, Manipulating Color and Pixels with Visual Basic.)

System Services provides functions to access the resources of the computer and the operating system. You’ll see how to call some of these functions to figure out the free resources on the system running your application.

The Multimedia functions allow you to play waveform audio, MIDI music, and digital video. You can achieve this with the MCI command string and MCI command message interface, which are discussed in detail in Appendix B on the CD, Using Multimedia Elements to Enhance Applications.

You declare the Win32 API functions with the Declare statement. One way is to enter the function along with the arguments, as in the following:

The Win32 API function mciSendString() is part of the Winmm multimedia library (which is in the Winmm.dll file in the Windows/System folder). The A suffix is a leftover from older versions of the API, where 16- and 32-bit functions coexisted. Under Windows 95/98, you must use 32-bit functions and ignore the alias of the function.

Nearly all API functions have their arguments passed by value. Only arguments that must be modified by the function are passed by reference. By default, Visual Basic passes arguments by reference, so you must always precede the argument names with the ByVal keyword.

You aren’t expected to remember the arguments of every API function or even the function names. It’s assumed you’ll look them up in a reference. The reference is available from within Visual Basic’s IDE, and it’s the API Viewer shown in Figure 13.1. 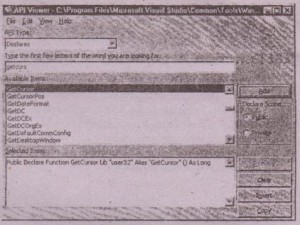 You can easily copy and paste any function into your Visual Basic programs. To do so, follow these steps:

When using the Win32 API functions, you must supply the functions declarations and their arguments. The Win32 API was written for programmers writing in the C or C++ language, so the documentation uses the C data structures, which you must map to their Visual Basic equivalents. Table 13.1 summarizes the C declarations and the corresponding Visual Basic data types. The third column shows how the arguments are passed to the API function. All types are passed by value, except Internet and Long Integer pointers.

If you call this subroutine with the following lines:

The Print statements will display the following lines in the Debug window:

The changes made to the x variable in the AnySub() subroutine have a global effect because the argument is passed by reference. If the called procedure has no reason to change the value of an argument, the argument must be passed by value. Some API functions store results in their’ arguments. These’ functions expect that their arguments will be passed by reference-In C~these .arguments are called pointers (they point to the-memory location where the variable is stored).