At times, you’ll want to change the menus dynamically. The MenuMod application. which is based on the MenuBMP application, shows how this can be done.

VB6 at Work: The MenuMod Project

The MenuMod application lets you switch the menu items from bitmaps to text and back. The application has the same menu as the menuBMP application. plus third item, whose caption is Display Graphics (when the menu displays text) or Display Text (when the menu displays graphics). The Click event handler for this me u item calls the DisplayTextMenu() or DisplayBitmapMenu() function to switch the menu between text and graphics. In the Modifymenu() procedure, you use the MP_STRING flag to change the menu item to text, and you use the MF_BlTMAP flag to change the menu item to graphics.

VB6 at Work: The MouseMov Project

The main portion of the code is the tracking loop. The code gets the current mouse position and uses this information to get the window handle and the class name. The class name is then displayed and updated each time the mouse moves over a new window. 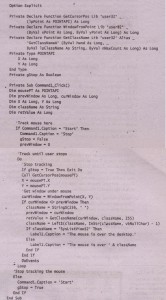 A related project is  the previously discussed MousePos project, which you’ll find in this chapter’s folder on the CD.

Many controls have a HitTest method whose function is to retrieve an object at a specific pair of coordinates. We used this method in the LVWDemo project in Chapter 8, but now it’s time to look at this method and see how it’s used with the GetCursorPos() function.

The HitTest method applies only to a few controls that can act as containers for multiple objects. The ListView control, for example, can host many ListItem objects. When the user double-clicks the ListView control, the DblClick event is triggered, but this event doesn’t report where the mouse was clicked. To find out which item was double-clicked, use the GetCursorPos() function to retrieve the pointer’s coordinates and pass them to the control’s HitTest method, which will return a reference to the object at this location.

Let’s return to the LVWDemo project and look at the ListView control’s Dbl- Click event handler. The ListView control is populated with company names and related data. When these items are displayed as icons, as shown it\ Figure 13.6, we should be able to detect the item that was clicked or double-clicked. The single click is reported by the Item Click event, which reports the clicked item. The declaration of the ltemClick event handler is: 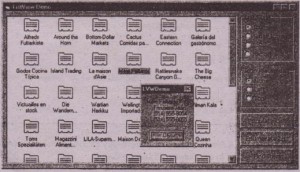 First, declare the GetCursorPos() function and the POINTAPI data structure in a Module as:

In the DblClick event handler, call the GetCursorPos() function to find out the coordinates of the pointer where the button was double-clicked:

The variables X and Y are first converted to twips, then passed to the HitTest method. The method returns a reference to the double-clicked item, which is stored in the ListItem variable. The ListItem variable must be declared as ListItem:

Using the ListItem variable, you can access the properties of the double-clicked item. For example, you can highlight it from within your code with the following statement:

or read its subitems through the collection:
LItem.ListSubItems

If the mouse double-clicked an empty area of the ListView control rather than an item, the LItem variable will be Nothing. If you attempt to access its properties, a runtime error will be generated. To avoid the runtime error, use the On Error Resume Next statement and examine the value of the LItem variable.

Here’s the complete listing of the ListView control’s DblClick event handler. If you open the LVWDemo project, you’ll see that it’s adequately documented. You can reuse this code as is (without the statements that process the LItem variable’s members, of course) in your code to react to the double-click event on a ListView control.

This is not the only use of the HitTest method or even the most common one. However, it’s not a trivial one and that’s why I presented it in detail. The HitTest method was designed to be used primarily with the DragDrop event. The DragDrop event reports the coordinates of the point where an object is dropped. If the destination of the drag-and-drop operation is a ListView or TreeView control, we usually want to know the item on which the source object was dropped. The declaration of the Dragfrrop event is:

Keeping a Window on Top

You’ve often seen applications that keep a window on top regardless of whether the window is active. Microsoft Word does this with its Find window. This is done with a single call to the SetWindowPos() API function, which is declared as follows:

Flags argument is an integer that contain one or more of the flags shown in Table 13.6. 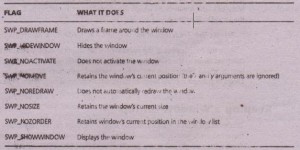 The sample application that demonstrates the SetWindowPos() function is called WinTop, and its, listing is shown next. 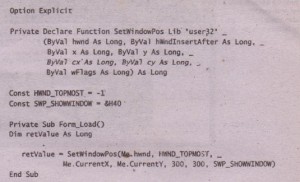 ..
You can use this technique to create the Search & Replace window of the RTFPad project (see Chapter 9, More Advanced ActiveX Controls). This window remains on top and visible even when the user switches to the editor’s Form (see Figure 13.7). All you’ve to do in order to always keep the Search & Replace window on top is to insert the declaration of the SetWindowPos() function and a ‘couple of constants in a Module:

SearchForm.Show
must be replaced by the following statement:

The values 470 and 155,which are hardcoded into the listing, are the dimensions of the Search & Replace window. The BorderStyle property of the Search- Form  user also be set to Fixed, so that users can’t resize it. . 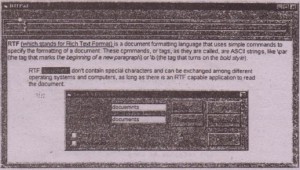 Some Special Issues in Recursive Programming
HiclclenControls in the DlrMap Application