We’ll revise this page to display the time on the server. To do so, we’ll add statements that are executed on the server. Copy the DATETIME.HTM file to the SRVRTIME.ASP file and replace the script with the following:

Here’s a more useful ASP page along the same lines. This page, GREET.ASP, displays a different greeting depending on the time of the day. 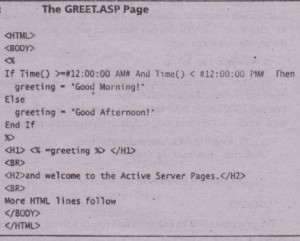 The statements between tile first pair of server-side tags «% and %» do not produce any output for the client. They simply assign the proper value to the . greeting« variable. The value of this variable is then sent to the client by the line <% ‘”greeting so. The expression “=variable’~ (without the quotes, of course) is replaced by the value of the specified variable when the script is executed on the server, The rest is straight HTML, which is rendered on the client as usual.

HTML and server-side statements can coexist on the same line too. The last example could have been implemented as follows:

Your server-side script can also call procedures you supply in addition to builtin procedures such as the Date() and Time() functions. You can write a function that accepts a numeric value and returns it as a string (the value 96, for example, as “ninety-six”). To call this function from within your script, enclose its name in the server-side script tags:

The actual definition of the function must appear somewhere in the same file. Since the entire procedure will be executed on the server and since it doesn’t contain any HTML’Code to be sent to the client, you can place it in a pair of <SCRIPT> tags, similar to the client-side scripts, with an added qualifier:

The procedure will be executed and return a string, which can be used in the script.