You must type the two consecutive commas if you omit the color argument; if you don’t, Visual Basic assumes that B is a variable name specifying the color of the box

As you may have guessed, there is an even easier way to draw a been the screen using relative coordinates. If all  wanted was a rectangle with known :Hmensions and its upper-left corner fixed at point (100, 400), the following command would create just that:

Closed shapes can also be filled with various patterns. clepeuding on the setting of the FillStyle property. By default, dosed shape- are tr msp.irent. To draw solid or hatched shapes, you must set rlu FillStylc: pro- I( rty, \A. hich can take any of the values shown in Table 6.3.

If the FillStyle I?roperty is 1and you still want to draw boxes filled with a solid color, use the BF option of the Line method. This option overwrites the FillStyle temporarily and. subsequent boxes are filled according to this property’s setting. The Circle method (discussed next) doesn’t have an equivalent option for drawing filled circles.

The Circle method draws circles, arcs, and ellipses. The method’s complete syntax is:

The coordinates of the circle’s center are X and Y, and R is its radius. These are the only mandatory ,)rguments, and they are expressed in units of the rur n-nt coordinate system.

The simplest form of the Circle method is Circle (X, V), R. The followmg statement uses It to draw a circle at the center of the Forrn l Form:

The circle’s radius equals one-third or the Form’s height, it the Form 1- taller than it is wide part or the ”:IITle m.,y be invisible

You can also use the Circle method to drawellipses if you include the aspect argument, Aspect is the ratio of the vertical to the horizontal radius of the e’ijipse and it can be an integer, froating~point number, or even less than 1, but it cannot be a negative number. If the aspect is smaller than 1, the ellipse extends horizontally and is squeezed in the vertical direction. If the aspect is larger than 1, the ellipse extends vertically. Figure 6.10 shows how the aspect ratio is defined. The two ellipses of Figure 6.W and their bounding boxes were drawn with the following statements: 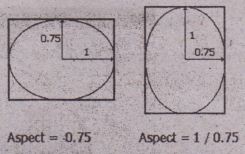 You also can use the Circle method to draw arcs. The arguments start and end specify the arc’s starting and ending angles in radians.

The. arc’s starting and ending angles are measured counterclockwise. Negative angles don’t reverse the direction of the arc. They simply tell Visual Basic to draw the arc as if they were positive numbers and then connect the endpoint that corresponds to the negative angle with the center of the 7ircle.As you may have guessed, this technique is used for drawing pie Charts Because circles (and connected arcs) are closed shapes, they are automatically filled with the patte~ sp~cified with the FillStyle property and take on the color specified by the FillColor property. For a discussion of these two properties, see the section “Filling Shapes,” earlier in this chapter.