The-benefit of using multidimensional arrays is that they’re conceptually easier to manage. Suppose you’re writing a game and you want to track the positions of certain pieces on a board. Each square on the board is identified by two numbers, its horizontal and vertical coordinates. The obvious structure for tracking the board’s squares is a two-dimensional array, in which the first index corresponds to the row number and the second index corresponds to the column number. The array could be declared as follows:

and you assign 1 to the square to which it was moved, to indicate the new state of the board:

To find out if a piece is on the upper-left square, you’d use the following statement:

Else
{empty square}
End If

Notice that this array is not zero-based. It just makes sense to waste the first element to·.code the application in a more familiar way. Board games don’t have zero-numbered rows or columns.

This notation can be extended to more than two dimensions. The following statement creates an array with 1000elements (10 x 10 x10): 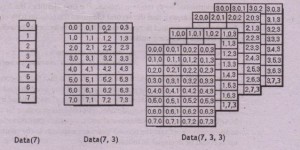