Home » Getting Started with Visual Basic » One Language, Three Editions

I assume that you have installed Visual Basic 6. This means you ha\re already decided which edition of Visual Basic you are going to use. Visual Basic comes in three flavors:

The Visual Basic Enterprise edition is the most advanced edition and is aimed at programmers who build distributed applications in a team environment. It includes all the features of the Professional edition, plus tools such as Visual Source Safe (a version control system) and the Automation and Component Manager, which are not covered in this book.

Depending on which edition of Visual Basic you installed, you may see fewer or more options in the menus and toolbars of the Visual Basic IDE. The options discussed in most of this book are present in all three editions. If some of the menu options in the figures are not  present on your system, you are probably using the Learning edition.

Visual Basic is not just a language. it’s an Integrated Development Environment in which you can develop, run, test, and debug your applications. Start Visual Basic, and you’ll see the window shown. This is where you are prompted to select the type of project you want to create. 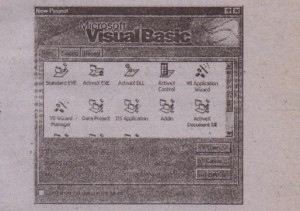 With Visual Basic, you can create the following types of applications.

These types of projects are available with the Professional edition. ActiveX components are OLE automation servers and are described
in Chapters 14 and 15. ActiveX components are basic code-building components that don’t have a visible interface and that can add special functionality to your applications. The two types of projects are identical in functionality, but are packaged differently (as executable files or Dynamic Link Libraries).

This type of project is also a feature of the Professional edition. Use it to develop your own ActiveX controls, which are described. An Active’X control such as a TextBox or Command button control, is a basic element of the user interface. If the ActiveX controls, that come with Visual Basic (the ones that appear in the Toolbox by default) don’t provide the functionality you need, you can build your own custom controls.

ActiveX documents are in essence Visual Basic applications that can run in the environment of a container that supports hyperlinking (such as Internet Explorer). These types of documents are not discussed in this book.

The Application Wizard takes you through the steps of setting up the skeleton of a new application. I believe that you shouldn’t use this Wizard unless you can develop a project on your own. Modifying the skeleton code created by the Wizard is just as difficult as developing your own application from scratch, if not more. You should, however, experiment with this tool to see the types of applications it can prototype for you.

The Wizard Manager lets you build your own Wizard. A Wizard is a sequence of windows that collect information from the user. After the user fills out all the windows, the Wizard proceeds to build an application, install software, or carry out an automated operation for the end user.

This is a feature of the Enterprise edition, and it doesn’t correspond to a new project type. It’s identical to the Standard EXE project type, but it automatically adds the controls that are used in accessing databases to the Toolbox. It also adds the database ActiveX Designers to the Project Explorer window. The ActiveX Designers are visual tools for accessing and manipulating databases and generating reports.

VB6 allows you to build Dynamic HTML pages that can be displayed in the browser’s window on a client computer. I don’t discuss this project type, but you’ll find an introduction to HTML and Dynamic HTML in Part VI. Instead of showing you how to use Visual Basic’s tools to automate the process of designing DHTML (and HTML) pages, I’ve included a section on the structure of DHTML documents. Even with Visual Basic’s tools, you can’t design DHTML pages without a basic understanding of Dynamic HTML.

VB6 allows you to build applications that run on the Web server and interact with clients over the internet with the Internet Information Server. I don’t discuss this Project type, but in Part VI you will find information on the basics of interacting with the server, through a component called Active Server Pages (which is basically what IIS Applications do).

You can create your own add-ins for the Visual Basic IDE. Add-ins are special commands you can add to Visual Basic’s menus (they usually appear under the Add -Ins menu). To do so, select this type of project. This topic is rather advanced, and we won’t look at it in this book.

This is not a new type of project. It simply creates a new Standard EXE project and loads all the tools of the Enterprise edition of Visual Basic.

In the New tab, you can select the type of a new project, as explained already. Switch to the Existing tab. to select an existing project and open it. To open a project you were working on recently, switch to the Recent tab, which contains the list of the most recently opened projects. In your daily projects, you’ll be coming back to the project you were working on during the last few days, and this is where you can find them easily.

Select the Standard EXE icon in the New Project window, and then click OK to open the window shown. 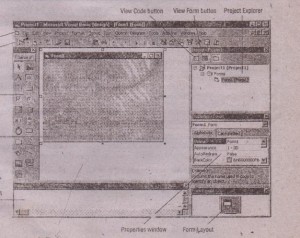 What you see on your screen now is the Visual Basic IDE, which is made to a number of components. The main window, in the middle of the screen. a Form named Form’l. The Form is the application’s window, and in it the elements of your application’s userinterface (checkboxes, Commands and so on).

The toolbars give you quick access to commonly used menu commands. Besides the main toolbar, which is displayed by default below the menu bar, the Visual Basic IDE provides additional toolbars for specific purposes, such’s editing, Form design, and debugging. To view the additional toolbars, choose View > Toolbars.

• The Standard toolbar is just below the menu bar and is displayed by default.

• The Edit toolbar contains the commands of the Edit menu.

• The Debug toolbar contains the commands of the Debug menu.

• The Form Editor toolbar contains the commands of the Format menu.

To open and close toolbars, choose View >- Toolbars to display a submenu containing the names of the toolbars. These names are toggles and turn the corresponding toolbars on and off. 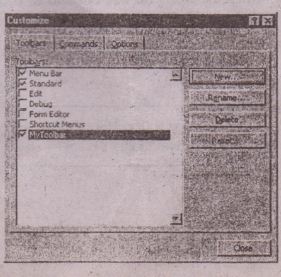 • Toolbars On this tab you can specify which toolbars will be visible, rename toolbars, delete them, and even create new ones. To create a new tool’ click the New button and enter the new toolbar’s name when prompt
• Commands This tab contains a list of the main menu options and a list of the commands of the selected option. Use this tab to add commands to our custom toolbars (I’ll describe the process in the following section). Options On this tab you can specify some general options for all . You can switch between small and large icons, specify whether Screen Tips display, and specify whether menus animate.’

ScreenTips are small yellow boxes that contain a short description of each toe Unless you specify not to display them, ScreenTips appear when the pointer hovers over a tool.

The Do Events Statement
VB6 at Work: The FormLoad Project