“This topic is rather advanced and you can safely skip it. Raising events from with in classes is not a very common practice. Since Classes don’t have a visible  user interface there are no external events to react to and from which to raise events. In the following chapter you ‘team how to raise events from within ActiveX controls have a visible interface and they must react to many external events such as mouse and keyboard events. As you will see it’s
actually quite common to raise events from Within ActiveX controls and quite simple too.

The situation is quite different with ActiveX DLLs. classes raise events based on internal events such as timeouts. We will revise the C timer Class so that it raises a ‘ Minute and an Hour event every time minute or an hour has passed. The revised c timer project along with its test project can be found in the EVN Tuner folder in  this chapter’s folder on the CD.

Since the C timer Class doesn’t keep track of time constantly, we must help it with a Tuner control. But the Class-Module doesn’t have a Form, so how can we use a Tuner control? We’ll add a Form to the project, but we’ll never show it. It will be a hidden Fon with a Timer control. The Class Module will be able to access the Tuner
-control on the Form and intercept its Timer event. Here’s how you can access an ActiveX control from within a Class Module.

1. In the Project Explorer select the C Timer component and rename it to Event Timer as shown in Figure 15.3.Then open the Project menu, select Add Form and add a new Form to the Class Module project.

1, In the Project Explorer select the C Timer component and rename it to Event- Timer as shown in Figure 15.3.Then open the Project menu select Add Form and add a new Form to the Class Module project.

2. Open the Form Form in design mode arid place an instance of the Tuner control on it. Set Its’Enabled property to True and its Interval property to 00 סס 1 , This value corresponds to 10 seconds. We don’t want our Time Class to spend too much computer time processing Tuner events, so we set a large timeout interval.

the Event Timer Project is.
the same as the C timer
project, but uses an Internal
timer to keep track of time. 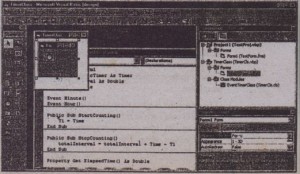 3. In order to access a control on another Form, you must create a Form variable in the Class itself. Insert the following declarations in the Class’ code:

The keyword With Events, tells Visual Basic that the e Timer control must carry with it its properties, methods, and events (which is why I named it e Timer). These variables will come to life when you set them to the appropriate objects. This action must take place from within the Class’ Initialize event.

The first statement assigns a new instance of the-Form object to the c Frm variable. Then the new Form is loaded. At this point we can access the controls on the Form. The last line makes the e Timer variable equivalent to the  Tuner 1 control on the Form 1 Form. The Class can now access the Timer 1 control on the Form 1 Form as e Timer just as the Form l can’ access it as Timer The two expressions are equivalent, but you can’t access the Timer control as Form l Timer l from within the class Module. If you expend-the Object drop-down list in the Class Module’s Code window  you with ‘the object e timer. Because the e Timer object variable is declared
with the With Events keyword, we should be able to program its events. That’s why its name appears in the Objects list. Select the e Timer object on the Objects list and then open the Events list in the Code window. You will see the name of the Timer event. Select and you’re ready to program the Timer Q event which is equiv~t to programming the Timer _Tuner event.

5. Insert the lines of Code 15.5 in the e Tuner_Tuner event handler.

Raising Events from within a Can

The Counting Boolean variable is declared in the Form’s declaration section and indicates whether the timer is counting. If the timer ~ paused, we shouldn’t process the timer event: This’ variable is ~ to True from with in the Start Counting method  and reset Far from within the Stop Counting method. This sub you tine is invoked every 10 seconds and increases the number of see  and elapsed ~ 10. every 60 seconds, it increases the number of minutes by  of 1, and every 60 minutes it increases the number of hours by in increment. J 1. If the minutes variable is u (that is, if it.has reached 60 and is reset back to 0), ~,J~our event must be raised. If not, we examine the value of the  seconds variable. If of,then the Minute event must be raised-This coding raises 59 consecutive Minute events, then an Hour event, and the process is repeated. Since we can’t issue ‘to events at once, we skip the Minute event when the Hour event is due. Obviously, the Hour event implies that a Minute event should take place.

6. In order for a Class to raise ‘an event, you must also declare the names of the events. Insert the following lines in the Class Module’s code window (outside any procedure):
Event Minute()
Event Hour()

The complete listing of the Event Tuner Class is shown next. Notice its similarities to and differences from the plain C Tuner Class. The Property Get procedures and the Class’ method don’t change. Only the code for accessing a Tuner control on an invisible Form is added, and the Tuner control’s Tuner event is programmed to raise the appropriate events.

To test the Event Timer Class, add a new project to the existing one with the File> Add Project command. On the test project’s Form, add a Command button and . four Labels. Arrange the Labels in pairs and align them as shown in Figure 15.4. The controls Labe 13 and Label 4 are where the number. of elapsed minutes and hours are displayed.

The even timer Class
TestFonn 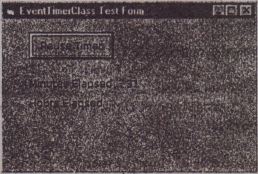 The TMR variable is declared as:
Dim WithEvents TMR As eventTimerClass

The hours and minutes reported on the Form’s Labels correspond to the time elapsed while the timer is counting.When the timer is paused the Event Tuner  Class doesn’t count seconds or fire any events.