On occasion, you’ll want to express the control’s new size in a given coordinate system without changing the container’s coordinate system. Let’s say the Form’s coordinate system is 1 (twips) and you want to place ‘a PictureBox on it with the exact dimensions (;f 1.20 x 2.00 inches. First, calculate how many twips correspond. to 1.20 and 2.00 inches, and then assign these values to the control’s Width and Height properties. Given that there are 1,440 twips in an inch, mapping inches to twips is straightforward. VIsual Basic, however, provides the SealeX and ScaleY methods to convert units between any two coordinate systems. Both methods have the identical syntax, which is:

Similarly, to convert the height of 140 pixels to twips, use the following statement:

Since the Form’s coordinate system is twips, you can omit the last argument of the SealeX and Scaley methods: You can resize the Picturel control with the following statements

These two properties apply to the Screen object, and they return the number of ‘1wips per pixel for an object measured horizonfally (TwipsPerPixelX) or vertically (TwipsPer Pixely)

V86 at Work: The Coords Project 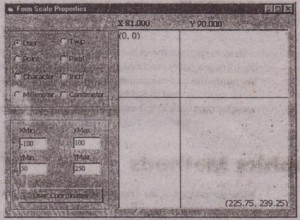 You can also set your own coordinate system by supplying the proper values in the four TextBox controls in the-lower-left segment of the window. You can use both positive and negative coordinates and then slide the pointer over the PictureBox to see its coordinates. The most interesting part of the Coords application‘s code is in the PictureBox control’s MouseMove event. You can open the Coords application with the Visual Basic editor to find out how it works. You can also interrupt the applicano: I and move or resize the PictureBox control by setting its Top, Left, Height, and Width properties. Thecode for the application manipulates the control’s Scale properties only, and you can’t change the control’s position with these properties. Let’s start by looking at the code of the Option buttons.

The Common Dialogs Control
Referencing the EventTimer Class in Other Projects