RecordSets are the foundation of database programming. Let’s look at an example that will help you visualize RecordSets and explore the Data control. The Data application, shown in Figure 17.3, is nothing less than a front end for an existing table in a database. 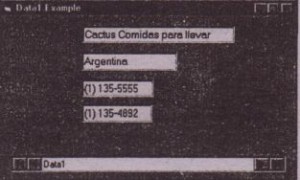 VB6 at Work: The Data1 Project

1. Start a new Standard EXE project and design a Form like the one shown in Figure 17.3. Start by drawing a Data control at the bottom of the Form. The Data control is your gateway to the database.
2. With the Data control selected, open the Properties window, locate its DatabaseName property, and then click on the ellipsis button to open the Open dialog box.
3. Select the NWlND database that comes with VisualBasic.
4. Locate theRecordsource property in the Properties window, and drop down the list of available entries. You’ll see a list’of all the tables in the NWIND database. Select the Customers table.
5.  Place four textboxes on the Form, as shown in Figure 17.3.
6. Select the first text box, and in the Properties window locate its DataSource property. Set it to Data.
7. Set the DataField property of the textbox to CompanyName. The DataField property is a drop-down ~ with the names of all fields in the Customers table.
8. Set the DataSource property of the other three textboxes to Data, and set the DataField property to Country, Phone, and Fax.

Not only can yO\!navigate through the tf\ble’s records with the Data control, you can also edit its fields. Change the value of a field, move to the next record, and then come back to the previous record. The changes you made to the record are saved to the database, and now you see the updated value of the record.

You should also attempt to enter invalid data in the table’s fields. The program won’t allow you to enter invalid values and will let you know why. If you attempt to enter a very long phone number, for the application displays a message indicating that the entry is too long for the field and gives’ you a chance to correct the value. The field was obviously declared with a limited length in the definition of the database. It is actually the database management system that issues the warning, not Visual Basic, and certainly not the application. You have yet to enter a single line of code. 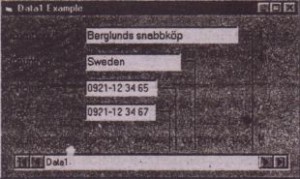 The most important properties of the Data control are:

At any given  the Data control is positioned at a single row (record) of its RecordSet. The user can move to any other record with the help of the navigation buttons on the Data control.

The most important properties of a data-bound control are:

When TextBox controls are bound to a specific field, and they are called, data bound. There are other controls that you can bind to the Data control’s. If you want to prevent users of the application from editing the table, you can use Label controls. If the table contains Boolean fields (that have the values TruelFalse only), you can bind them to CheckBox controls. Some common controls aren’t data-bound. The ListBox control, for example, isn’t data-bound. Microsoft provides an enhanced version of the UstBox control, the data-bound Ust- Boxcontrol, which can be automatically populated with the values of a column in the RecordSet. You’ll see later how to use this control in your applications.

You can set the following properties of the Data control from the Properties window, or you can use them from within your code to manipulate the control.

EOF The EOF (End of File) property returns a True/False value that indicates whether the current record position is after the last record in a RecordSet object.

BOF The BOF (Beginning of File) property returns a True/False value that indicates whether the current record position is before the first record in a RecordSet object.

BOFAdion This property sets or returns a value indicating what action the Data control should take when the BOF property is True, which can be one of the actions in Table 17.1.