Home » Basic ActiveX Controls » The Implementation of the Search() Function

The Implementation of the Search() Function VB Help

The burden of sorting the elements to be searched often lies with the program, but with a flexible tool such as a sorted ListBox control, maintaining’ a.sorted list at all times is ea,sy.Combining a sorted list of keysmaintained by a ListBox control and the Binary Search algorithm is a powerful approach that can be used in situations ‘in which you’d normally deploy database techniques. The database objects,Database Programming with VISUalBasic) require significant overhead, which isn’t worthwhile for a small application such as Keyl.ist or BSearch.
. In Search project, the ISBN field is editable (Locked property set to False), so that the user can enter an ISBN value. As the user edits the contents of the ISBN textbox, the Change event occurs with every character typed and the following ,code is executed.

The code calls the BSea:n:hOfunction with the text entered in the txtISBN TextBoxcontrol. The BSearchO function searches the ListBox control fo r an item that partially matches its argument. If the item is found, the function returns its position in the list and highlights the key in the list. Ifthe item is not found, it returns the value -1. If the item is,found, the program also selects it in the list and calls the ListBox control’s Click event to update the contents of ‘the other TextBox controls in the data entry section of the-Form. The listing of the BSearchO function follows 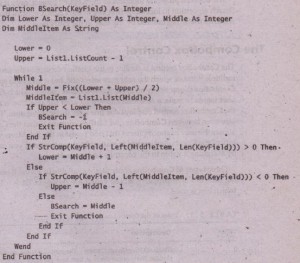 The BSearch project is identical to the KeyList project, only it uses the Binary Search algorithm to locate the first key in the ListBox control that partially or fully matches the string entered by the user in the ISBN box.

The Droplzown and Simple Combo Box controls allow the user to select an item from the list or enter a new one in the edit box of the control. , The Drop Down List is similar to a List control in the sense that it restricts the user to selecting an item, but not entering a new one. However, it takes much less space on the Form. When the user wants to make a selection, the Drop Down List expands to display more items. Afterthe user has made a selection, the list contracts to a single line again. 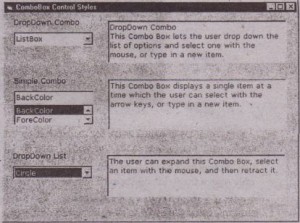 Most of the properties and methods of the ListBox control also apply to the Combo Box control. The Addltem method adds items to a ComboBox, and the Remove- Item method removes items from a Combo Box. To access the items of the control, you can use the List array, and the current selection in the control is given by its ext property. You can also use the ltemData property to maintain sorted lists of keys, as you’ll see in the KeyCombo example shortly. You can even set the control’s MultiSelect property to 1 (Simple) or 2 (Extended) to allow the user to select multiple items in a ComboBox controL To find out whether an item has been selected, use the Selected property as before,

VB6 at Work: The KeyCombo Project

The KeyCombo application, shown in Figure 5.12, is similar to the KeyList application you saw earlier, but KeyCombo maintains three indexed lists, and the user can recall records based on anyone key. Each record .has four fields, three of them being potential keys. In a real application you could add any number of fields on the right-hand side of the Form. 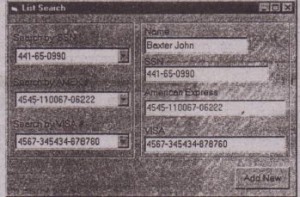 KeyCombo is a useful Form for incorporating into a larger payment tracking .application. Customers can be recalled by their Social Security number, their AmericanExpress card number, or their VISAcard number. All three keys are unique, and  only one of tl)e.fields needs to be filled out for the application to run.