This result is passed to the most recently interrupted function, whiCh is factorial(l). This function can now resume operation. complete the calculation of 11(1 x 1) and then print another message indicating that it finished its calculations. A$ each suspended function resumes operation, it passes a result to the function from which it was called, until the very first instance of the factorial() function fmishes the calculation of the factorial of 4. Figure 11.3shows this process. (In the figure, factorial is abbreviated as/act.) 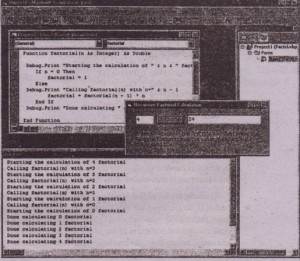 What Happens When a Function Calls itself

If you’re completely unfamiliar with recursive programming, you’re probably uncomfortable with the idea of a function callingitself, Let’s take a closer look at what happens when a function calls itself. As far as the computer is concerned, it doesn’t make any difference whether a function calls itself or another function. When a function calls another function, the calling function suspends execution and waits for the called function to complete its task. The calling function then resumes (usually by taking into account ariy result returned by the function it called). A recursive function simply calls itself instead of another one. Let’s look at what happens when the factorial in the previous function is implemented with the following line L” which factoriall () is identical to factorialt ( ):

.Similarly, the code of the factorial1() function is:

.Recursive Calls and the Operating System

Recursion isn’t as complicated as you may think. Here’s an example of a recursive situation you may have experienced without knowing it Figure 11.4shows a simple application that fills the background of a picture box with a solid color. Instead of setting the control’s BackColor property though, it draws vertical lines from one end of the control to the other. Every time the New Color button is clicked, the Picture- Box control is filled slowly with vertical lines. The color of the lines is chosen randomly. This application is quite similar to the ‘ClrGrads application of Chapter 7, Mtlnipulating Color and Pixels with Vrsual Basic, w!lich ~ the background of the control with a gradient. I used a solid color in this example to simplify the code. 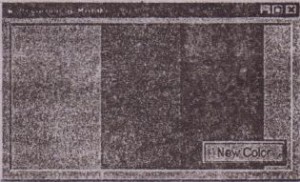 Posted on November 5, 2015 in Recursive Programming