Home » Getting Started with Visual Basic » Your First VB Project

When you select the Standard EXE type of project in the New Project window, Visual Basic creates a new project named Project 1. Project 1 is the top item in the Project Explorer window. The Forms folder under the project name contains the. names of all Forms that make up the project. As you will see in the next chapter, a project can have more than one Form.

Renaming and Saving the Project

You should start your projects by renaming their components and saving them, preferably in a new folder. To do so, follow these steps:

Now’ you are ready to save the project. To save a project, you must first save the Form(s) and then the project (more on this in Chapter 2,!n which we’ll look at the structure of a project and how it’s saved on disk). When saving projects, try to use meaningful file names so that you’ll be able to locate them later. For the projects of this book, I had to use eight-character names, a limitation imposed by the CD production process.

1. Choose File  >- Save Example As. (Visual Basic suggests the default name for the Form, so you must select the Save As command, not the Save command.) 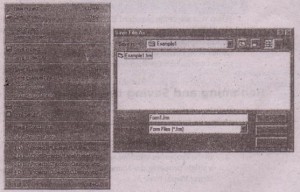 2. In the Save File As window , click the New Folder button to create a new folder and save the project there. Each project and its files should be stored in a separate folder, but it is possible to store multiple projects in the same folder.

The Elements of the User Interface

The icons in the Toolbox of the Visual Basic IDE and their names are shown Let’s quickly run through the controls shown in the Toolbox.

This control is used to display images, and the images are set with the Picture property. The Picture Box control supports a number of  methods for generating drawings.

This control displays text on a Form. that the user can’t edit; Labels commonly identify other-controls and can be transparent, so the text appears to be placed directly on the Form. You set the label’s text with the Caption property.

This control is used to draw boxes on the Form and to group other elements.

This is the most common element of the Windows interface. A Command button represents an action that is carried out when the user clicks the button.

Option buttons, or radio buttons, appear in groups, and the user can choose only one of them. The Option button’s main property is Checked, and it is True if the control is checked, and False otherwise:The Option button is a toggle. Every time it’s clicked, it changes status (from ,checked to cleared and back).

The Horizontal and Vertical Scroll Bars

The horizontal and vertical scroll-  bars let the user specify a magnitude (the current location in a long piece of text, a numeric value, and so on) by scrolling the control’s button between its minimum and maximum value.

You can use this control to perform tasks, at regular intervals. The main property of the Tuner control is Interval, which determines how often the Tuner notifies your application. If the Interval property is set to 10000,the Timer control issues a Timer event every 10 seconds.

You use these controls to add file-handling capabilities to your application. They are normally used together ‘to provide an interface for accessing and exploring drives, folders, and files. The File System controls are:

This control displays the drives on the system in a drop-down list from which the user can select,

This control displays a list of all folders in the current drive and lets the user move up or down in the hierarchy of the folders.

This control displays a list of all files in the current folder.

This control is used to draw graphical elements, such as boxes and circles, on the surface of a Form.

Similar to the Shape control, the Line control is used to draw lines on a Form.

1;his control provides point-and-click access to data stored in databases. It has many properties and methods.