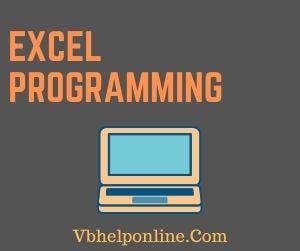 It is the most powerful tool used by the Microsoft Office. It can manage spreadsheets, manipulation of data with many other functions. To give support of programming to excel it is done with using (VBA) Visual Basic Application. Programming with excel help us in many ways:

What is Excel Programming?

It is done using macros of (VBA) Visual Basics for Applications Macros helps to automate daily routine works. A macro has basically set of instructions which excel execute on data which you provide it according to each instruction after another, it’s save our time to do same work with multiple while calling it where we need.

Second way required you write code and debug it and also we can create user forms. This will help us to create our custom reports, plotting graphs according to the data while it is dynamically change and automation of repeated task. It allow to communicate with excel sheets.

Setting up the Visual Basic Editor or Macros:

To create your own macros, first we need to add developers tab in excel executable program and this will never remove unless you manually hide it from options. In this tab there exist the visual basic editor to edit macros, macros to create new macros, record macro using relative reference which help us to record action and create macro of these actions. In visual basic we code instructions manually to do automatize repeated task. In it there is an option to create user friendly forms to enter data in desired excel sheet.

There are so many applications exist in the world which used excel visual basics to automate their works. Insert records of retail shop using user form will automatically update all the sheets which are used in the user form. Maintain transactions of school fees of each students and many other.

These applications are user friendly so that easy to understand and easy to use. If something wrong input to these forms the may not generate errors but show you the message box which have information about the wrong inputted field.

To work with excel programming is not so much difficult if you are familiar with programming concepts before. This is similar to programming language but with functions of excel. If you are new to this programming than there are many tutorial for beginners to start excel programming using visual basics for applications to automate your daily routine work.