The ActiveX User Interface Wizard does it so well for us. The Initialize event can be used to enter initialization code that doesn’t involve properties. If you attempt to set a property value or do something on the control (for instance, printing the . Title on the control with the statement User Control.Print “Control”) you’ll get the following error message:

The User Control object is being initialized It doesn’t exist yet. That’s why the following statement

works where executed from within other events but not from with in the Initialize event.

So what can you do from within this event? Very tittle You can assign initial values to the private variables of the control but you can’t access the control’s properties not ‘even the Ambient object.

‘In the Init Properties event you can  initialization code that controls the appearance of a “newborn” control. For instance you can date nine what happens if the user places the control on a Form by double-clicking on its Icon instead of actually drawing the control on the Form. Visual Basic places ‘an instance of the . control on the Form and it will have a certain size (which is the same for all controls). if your control contains a long default title a shape or any element you want to be entirely visible you can adjust the initial size of the control with a couple of statements such as the following:

When your control is placed on a Form with a double-click of its icon its initial size is 2400 by 1200 twips.

The Extender and Ambient objects are also available from within the Init Properties control because the control has been sited. You can display a title on the control in the same font as the container’s font as follows:

These two lines display the string “Fab Control” in the control’s upper left comer in the font of the container. In addition your control’s font will also be initially set to the Form’s font.

As you have learned the User Control object is basically a Form on which you can place other controls draw shapes display text and detect events. It even has properties such as Auto Redraw and Sale mode which make it suitable for drawing at run time. But it’s not called Form it’s called User Control. In addition it has a few properties that are unique to ActiveX controls and we are going to look at them in this section.

1. Go back to the generic control, and place two Command Buttons on the User Control. Don’t change their names. .
2. Add the following lines to move the focus to the Command2 button in the Enter Focus event

3. Switch to the test From delete all controls on the Form, and place an instance of the new control (large enough to display both buttons) and another Command Button on the Form.
4. Run the project and check out how the focus is moved from one control to the other. Notice that when the user control takes the focus it passes it to the Command 2 button. You can’t move the focus to the Command 1 button with  the Tab key. The user control is a single entity and it gets the focus once

By default a user control is not a container. In other words it is possible to draw a Command Button that lies half on the user control and half outside. To change this behavior set the ControI Container property to True.

Some controls the Tuner being the most typical example are.invisible at run time.If your user control does not have a user interface and need not appear on the Form set its Invisible All centime property to True.

Use this property to display a BMP file in the toolbox in place .of the ActiveX Control generic icon. The Tool box Bitmap property’s value is a BMP file’s path name but the bitmap is stored in the control and distributed with it

1. Assign the-value “A” to the user control’s Access Keys property (without the quotes).
2. Switch to the test Form and run it. Notice that you can switch the focus to the user control by pressing Alt+A,
3. Now stop the application, return to the user control, and open the Access- Key Press event. This event is invoked every time the access key is pressed. Enter the following lines to display the key’s ASCII value

To move the focus to a specific constituent control or to perform some action when the focus is moved to the user control enter the appropriate code in the Access Key Press event. Let’s add. access keys to the two Command buttons of the last example. Follow these steps:

L Switch to the User control object and add two Command buttons, Command 1 and Command 2  as shown in Figure 16.15. (If you have followed the steps of the examples in the section I Can Get Focus” the two Command buttons already on the Form.)

When the focus is moved to
a custom control, it is actually
moved to one of the
constituent controls. 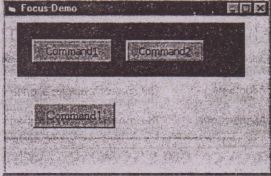 2. Switch to the test Form, and place an instance of the new control, another button or another VB control on the Form.
3. Run the test project and move the focus back and forth Notice the following

When you move the focus to the custom control with the mouse, the
first Command button takes the focus.

When you move the focus to the custom control with the Tab key, the ASCII value of the shortcut key is displayed in the Immediate Execution window

4. Now switch back to the User Control object and assign shortcut keys to the two Command buttons. Change their caption properties to Command&l and Command 2 so that the keys 1 and 2 will become their access keys.
5. Run the test project and experiment with moving the focus among the various controls on the Form

The next example demonstrates an ActiveX control that contains all three types of members-properties methods and events. It’s a simple alarm that can be set to go off at a certain time and when it times out it triggers a Time Out event. Moreover while the timer is ticking the control updates a display showing the time elapsed since the timer started (the property Count Down must be False) or the time left before the alarm goes off (the property Count Down must be True). Figure 16.16 shows the test Form for the Alarm control. The first instance of the Alarm control (Process A) counts the time since the Tuner started and the second instance (process B) counts down the time left before the alarm goes off.

The test Form for the Alarm
custom control