Home » Getting Started with Visual Basic » Creating a New Toolbar

The window titled Project is the Project Explorer,which displays the components of the project. Simple projects, such as the ones we develop in the early chapters of this . book, are made up of a single Form In later chapters, you’ll see projects that have . multiple Forms and other types of components, such as Class Modules and ActiveX
controls.

The project components are organized in folders, and the Project window is called Project Explorer because it has the look of the Windows Explorer. As you will see in later chapters, Visual Basic 6 can manage projects and groups of projects.

The Toolbox contains the icons of the controls you can place on a Form to create the application’s user interface. By default, the Toolbox contains the pointer icon and the icons of 20 ActiveX controls (explained later in this chapter w the section “The Elements of the User Interface”). To place a control (such as a Command button) on a Form, you first select it with the mouse and then move the mouse over the Form. When the mouse is over the Form, the cursor tums into a cross, and you can draw the control on the Form, just as you would draw a rectangle using a drawing application. The size of the rectangle determines the size of the control.

To add a new tab to the Toolbox, follow these steps:

1. Right-click the Toolbox to open the shortcut menu.
2. Choose Add Tab, and enter the name of the new tab. Visual Basic displays a new button (such as the General button) in the Toolbox.
3. Click the new tab button to open the tab, and then right-click it to  display a shortcut menu.
4. Select Components to display a list of all ActiveX controls installed on your system.
5. To add to the current tab, check the checkbox in front of the names of the controls, as shown.

The Properties window contains the property’ settings for the selected control. Properties are attributes of an object, such as its size, caption, and color. You can adjust the appearance of the controls on the Form. with point-and-dick operations. For example, you can set the string that appears on a Command button by locating the Caption property in the Properties window and typing a new value, such as “Click me!”. To change the color of a Form, locate the BackColor property in the Properties window, and click the arrow button next to the current value of the color ..visual Basic displays a color selection box, as shown. Select a color on this
box to instantly fill the Form with the new color . 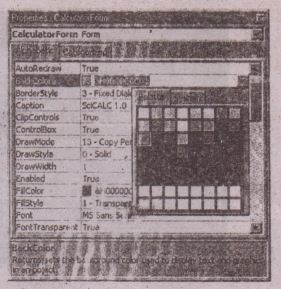 You use the Form Layout window, which is in the lower-right comer of the Visual Basic IDE, to determine the initial positions of the Forms in your application. You can move Forms around and place them on top of each other. This window is useful in applications that use multiple-Perms because you can specify how each Form is positioned with respect to the main Form.It shows the placement of three Forms on the Desktop and their initial relative positions. The insert in the lower-right corner shows how the placement of the Forms was specified in the Form Layout window, 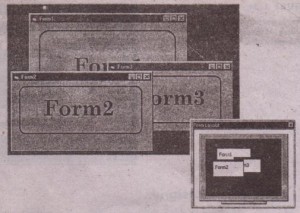 The Immediate Window
The Do Events Statement