Manipulating pixels with the SetPixelV() and GetPixelV() functions is significantly faster than using their Visual Basic counterparts, but it is still slow. There’s a better method, but it requires even more API functions.

When you draw with Visual Basic methods on a Form, the drawing takes place it an area of the memory that is mapped on the Form’s window. Visual Basic has a handle to this memory, and there are several layers between your Visual Basic code and the actual window. The API functions discussed in the previous section do the same, but they are faster than Visual Basic code. (After all, Visual Basic has no call the same function internally; it hides some of the complexity of drawing operations, but it’s slower.

No matter how Windows handles drawing and painting operations, eventually, the bitmap must be stored somewhere in memory. There are API functions that allow applications to access this area of the memory and draw by setting bits and bytes in memory. Drawing in memory is faster than drawing on device contexts, be more complicated, Moreover, when you’re drawing in memory, nothing appears 0 the screen. You must also provide the code to transfer the bitmap from the memory to a window on the monitor. Even with this additional step, drawing in memory is considerably faster than drawing on device contexts.

Its argument is the device context of the control (or·the Form) where the drawing will be displayed. If you want to prepare a bitmap in memory and then display it on the Picture Box1 control, use the following statements:

After these statements are executed, you can draw on the hSourceDC device context using the drawing functions we have discussed already. Notice that the hSourceDC device context isn’t directly mapped to the monitor. It lives in the memory and can be updated really quickly. To display it, you must transfer its contents to the PictureBox2 control with the BitBlt() function.

The third Command button on the CopyPix project’s Form, Copy Fast, uses this technique to read the pixels of the top Picture Box control and set the pixels on the bottom Picture Box. The code behind the Copy Fast button is shown next. 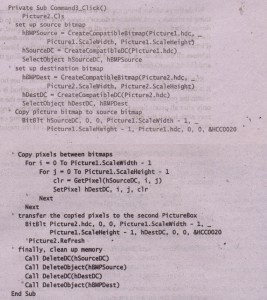 While the pixels are being copied, the screen isn’t updated. You’re drawing something in memory and Windows doesn’t know what you intend to do with it, so it doesn’t display it anywhere. After all the pixels have been copied, we must move the bitmap ~m. the memory (the hDestDC context) into the destination control (PictureBox2 control), This is done with the BitBlt() function, Finally the program releases all the’resources it created during its operation by calling the DeleteDC() and DeleteObject() functions.

Run the CopyPix project, and click the Copy Fast button to see how much faster it is than the other two methods. The drawback of this method is that you can’t watch the progress of the pixel copying operation. You’ll see the second image only after all pixels have been copied. If you’re manipulating large images, you may wish to call the BitBlt() function more often (after copying each column of pixels, for example). This will introduce some delay, but the method described in this section is still faster than the other two. You may want to use a progress indicator to let the user know that the program is running and to estimate how much time is left before the operation is finished.

This example concludes the discussion of API functions. Next, youll see ~ to extend Visual Basic by contacting external applications, such as Excel and Word, and manipulating their objects through VBA. Office applications provide so many features you can use from within your VisualBasic applications that it doesn’t make much sense implement them from scratch on your own.