The names that appear under the Description heading are the strings that will appear in the drop-down list of the Text Alignment property.As you have noticed, properties with a limited’ number of settings display a drop-down list in the Properties window.This list contains descriptive names (instead of numeric values)and the developer can select only a valid setting.

Similarly the text effect is manipulated through the Effect property whose settings are Show in Table 16.2.

TABLE 16.2: The Settings of the FlEX Label Control’s Effect Property

like the Text Alignment property the Effect property has a small number of valid settings which will be identified in the Properties window with descriptive names.

Except for a few custom properties this control must expose the standard functionality of the Label control. Most of the custom control’s functionality exists already and there should be a simple technique to borrow this functionality from other controls rather than implementing it from scratch. And this is indeed the case. Visual Basic provides a wizard which will generate the code for implementing standard members. The ActiveX Control Interface Wizard will generate’the code that implements the standard members and you only have to provide the code for the custom properties.

To start a new Activex control project follow these steps 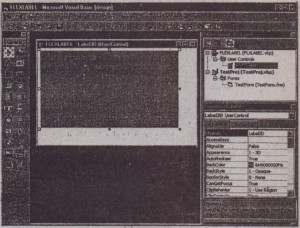 A new object was just introduced: the User Control object. As you will soon see  the user Control is the “Form” on which the custom control will be designed. It and behaves like a regular VB Form but it’s called a User Control. User- Control objects have additional unique properties that don’t apply to a regular Form but in order to start designing new controls think of them as regular Forms. Whereas the label application aligns and displays the caption on a Form the Label 3D custom ” tom control uses the same code to draw the caption on the User control object (we’ll simply Change all instances of ‘Me” to ”User Control”)

You’ve set the scene for a new ActiveX control. Before we insert even a single line of code we’ll let a Wizard generate as much of the custom control as it can for us. Among other things it will design the control’s structure. 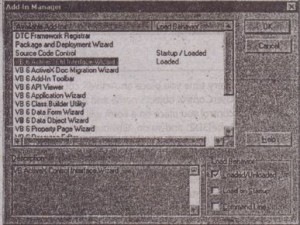 The ActiveX Control Interface Wizard will guide you through the steps of designing the skeleton of a custom Activex control. The Wizard will not add the code to . align or even display  the caption but it will create a functional control with most of the standard members of a typical ActiveX control.

The first screen of the Wizard is a welcome, and you can disable it in the future by checking the Skip This Screen in the Future check box. Click the Next button to .start the design of your Control’s user interlace 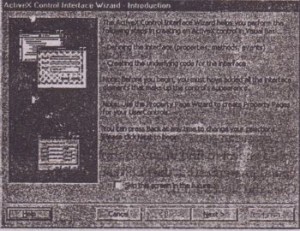 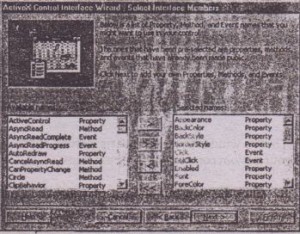 To add a new member select it from the left list and click the button that has a single right-pointing arrow. Add the following members to the custom control:

As you can see I’ve included all the standard properties events and methods you’d expect to find in any control that’s visible at run time. I’ve omitted the data bound properties but the FLEX Label control won’t be connected to a database field. Click the Next button.