Let’s start our discussion with a few simple properties that you can see that design time through the control’s property pages. To experiment with the settings of the property pages, open the TView1 project in this chapter’s folder on the CO. The project’s main Form is shown. After setting Some properties (they are discussed next), run the project, and click the Populate Sorted –‘n to see the effects these property settings have on ‘he control. We’ll discuss tile other buttons on the Form in the following sections. 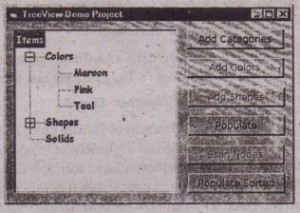 With the TView! project open in the Visual Basic IDE, right-click the control and from the shortcut menu select Properties. The TreeView control’s property pages contain three tabs: the Font and Picture tubs’ (which are trivial) and the General tab. 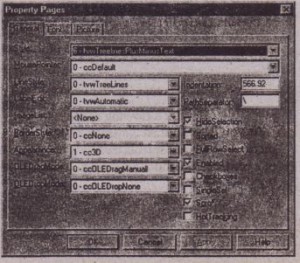 On the General tab, you can be list, as well a few general attributes. The Style property of the TreeView control can have one of the values shown in Table. This property determines the appearance of the data on. the control and the navigation model too. Set the TreeView control’s style on the first property page, the project, and then open the nodes Shapes and Colors to see how they are displayed. Stop the project, change the Style property, and run the project to test all the settings.

The checkboxes on the right let you specify the general attributes of the control:

As a collection, Nodes exposes the following members.

Since most of the arguments are optional (only the Text argument is required), let’s start with the simpler forms of the Add method. To add the first-level items to a TreeView control, use this syntax:

You may omit any of the optional arguments, but you must still insert the appropriate commas to indicate the absence of the corresponding argument(s).

In this and the following sections, we’re going to examine the code of the TViewl project. The Add Categories button adds the three top-level nodes to the TreeVlew control with the following. statements.

When these statements are executed, three nodes will be added to the list. The strings “COLOR”, “SHAPE”, and “SOLID” are keys of the corresponding nodes.· They are required if you want to.place items under the Colors, Shapes, and Solids nodes. After clicking the Add Categories button, your TreeView control looks like the shown at the left.

To add a few nodes under the node Colors, use the following statements:

The lines of Code are the Add Colors Command button’s Click event handler: Run the project, click the first button (Add Categories) and then the second button (Add Colors). If you click the Add Colors button first, you’ll get an error message, indicating that there’s no node with the “COLOR” key. Child nodes can’t be inserted unless their parent nodes exist already. (The TViewl project’ ~code on the CD contains a few additional statements that disable the buttons that generate similar runtime errors.)

The syntax of the these statements. for both buttons is identical. The first argument is the key of the node, under which you want to place the new one. The second argument indicates the relationship between the node specified in the first argument and the new node. Since we want the color names to appear under the Colors node, their relationship is twoChild the new nodes are children of the existing node). Because we aren’t going to place any nodes under the color names, there’s no reason for the color names to have a key, so the third argument is omitted. The fourth argument is the text of the node, and the remaining arguments are also omitted.

To add child nodes under the Shapes node, use the following statements. This is the Shapes button’s Click event handler.

Add a third Command button on the Form, name it Add Shapes, and insert these lines in its Click event handler. If you run the project and dick the three buttons in the order in which they appear on the Form, the TreeView control will be populated with Colors’ and Shapes. If you double-dick the items Colors and Shapes, the TreeView control’s contents will be expanded and the control will look like the one shown to the left.

First, we must add the header, a node that will contain all other nodes as children:

As you probably expected, there is no parent node or relationship for this node, just a key and the node’s text.

Then, we must revise the statements that add the first-level items. They now belong to the Items node, so their first argument (Relative) must be the key of the parent node and their second argument (Relationship) must be twoChild. Revise the Add Categories button’s Click event handler as follows:

The remaining statements need to be modified. They add child nodes to existing nodes. By making the Colors node a child of the Items node, all the child nodes for Colors will also follow. The same is true for the Shapes node .

.Since the Treeview control’s nodes aren’t expanded by default, you can expand the Item node from within your code with the following statement:

As I mentioned already, the items of the Nodes collection can be accessed by an Index value or their key. The last statement expands the top node in the collection, but none of its child nodes. To expand all the nodes that have child nodes, you must scan the items of the Nodes collection and set their Expanded property to True, You’ll . learn how to scan the nodes of a TreeView control later in this chapter .

Place a new Command button on the Form, name it Populate, and insert the following statements in its Click event handler: 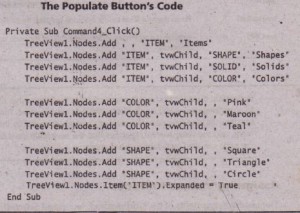 When the Populate button is clicked, it will produce the output shown on the left. U you open the lViewl project and examine its code, you’ll see that it contains additional statements that enable various Command buttons, Most of the buttons on the Form are initially disabled to prevent user errors. For example, the Add Colors and Add Shapes buttons are initially disabled because you can’t add child nodes before their parent nodes exist. You’ll also see the statement TfeeViewl. Nodes.(year in several buttons’ handlers. This statement clears the contents of the TreeView control.so that the program won’t keep adding the same items every time its buttons are clicked.

The last two arguments of the Add method, Image and Selectedlmage, are the two pictures that will appear in front of the node. The Image picture will appear by default in front of the node and the Selectedlmage picture will replace the default picture when the node is selected, These two arguments are Picture objects; they
can be the Picture property of a PictureBox control or they can be loaded from a file at runtime with the LoadPicture function. For example, to assign the bitmap stored in the C:\CONTROLS\IMAGES\SHAPES1.BMP file to a new node, use a statement like the following one:

The following statements set up an ImageList control with three small images for the Globe project (discussed in the next section) and assign it to the TreeViewl control’s ImageList property. The code assumes that the three images are stored in the same folder as the project that uses them:

To add three new nodes and assign the three bitmaps to them, use the following statements: 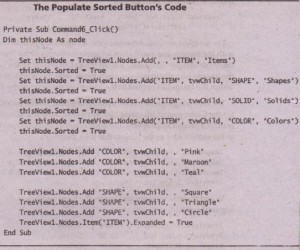